Dictatorship of the Righteous, The Best Far-Right Money Can Buy 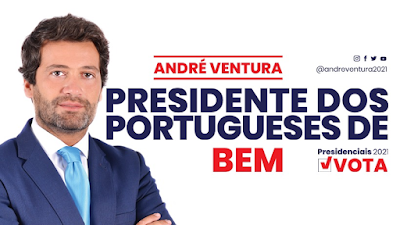 Unlike his European counterparts, André Ventura - leader of the Portuguese far-right CHEGA - has not been all that shy on his goals and so far has already claimed such human rights violations such as physically castrating sex offenders, chopping off the hands of burglars and creating a new Portuguese Constitution that would implement a "dictatorship of the righteous". In the above picture his campaign slogan: "President of the Righteous Portuguese".
The (not so) invisible American hand
On April, 2019, CHEGA had just been freshly founded and amongst accusations of presenting over 2,600 fake signatures to the Constitutional Court, with under aged and even dead signatories that had to be replaced before the party could be legally registered to run for elections, the news were that the United States embassy in Lisbon had already summoned André Ventura for a meeting one month earlier, in March.
Ventura has also opposed Steve Bannon's prosecution claiming it was just a political witch-hunt that showed how the justice system can be influenced by politics, although so far no evidence has surfaced that Bannon's The Movement has funded CHEGA truth is that another American millionaire has done such: Caesar DePaço.
Caesar DePaço has been in the process of founding the DePaço Foundation and the cadre of the foundation includes several members of CHEGA, Mr. DePaço is the owner of Summit Nutritionals that claims average earnings of 3 million euros every year just in Portugal, enough to feed his philanthropy of donating half of it to USA's law enforcement, via patrol cars or K9 units training. The Executive Director of the Foundation is none other than José Lourenço, vice-president of CHEGA with ties to several boxing clubs in Oporto city, whose sportsmen act as André Ventura's bodyguards, and to Fernando Madureira, the leader of the ultra Super Dragões that was investigated under drug dealing charges back in 2015.
The best far-right money can buy

Email ThisBlogThis!Share to TwitterShare to FacebookShare to Pinterest
Labels: Far-Right in Portugal