COVID-19 New Deal: Building the jobs of the future NOW! 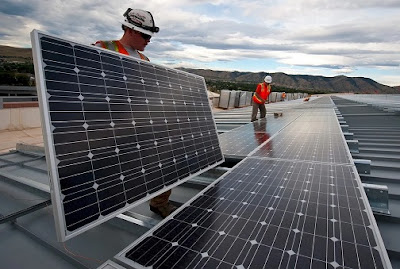 Rebuilding economies after the COVID-19 outbreak seems impossible given that unlike an actual war there are no infrastructures to rebuild, thus creating jobs and relaunching the economy. Or is this the chance for a real Green New Deal?

I’ve been reading and listening almost compulsively to all analyses on mainstream media both in Portugal and abroad on how we can resurrect our economy after the COVID-19 lockouts and all seem to agree on a single point: everyone is comparing this outbreak to a war, but we can’t apply measures similar to a Marshall Plan because we are not dealing with an actual war, so there are no infrastructures to  rebuild to create jobs and relaunch the economy.

If it was a more earthlier catastrophe like a tsunami or an earthquake, threats that historically have affected Portugal and its Azorean islands, we could still use the usual formula that states apply to reduce unemployment and boost the economy: rebuild the damaged infrastructures, but COVID-19 being microscopical the damage it has created is far less palpable.

A couple of days ago I engaged on a Twitter debate with other Lefties and I started suggesting a lot of measures I realized could be taken, last month I interviewed climate activist author Carmen Lima for the Portuguese edition of Pravda.ru and noticed that we are in need of a lot of infrastructures being built if we are ever to implement real change on creating an economy and way of life that is far less damaging to this planet than the current Capitalist driven craze, and that change needs to happen sooner than later.

We agreed that the geopolitical wars of the future will be fought over resources such as water and lithium, like the wars of the 20th century were mostly oil driven to fuel the economy of the United States, I had that in mind when I started arguing that yes, we have no infrastructure to rebuild, so why don’t we start building desalinization plants, lithium ion battery processing facilities, biodegradable plastic industries, photovoltaic systems, hydrogen production the usual "let's build infrastructure to create jobs and restore the economy" only greener and creating NOW the jobs of the future.

The reaction I got was: so, you mean a Green New Deal? I had never been all that enthusiastic regarding a Green New Deal becoming a real thing during my lifetime, do we really think that Capitalist driven economies and Liberal governments would adopt such measures, reducing profit? It all just seemed very optimistic Woke Left stuff, a vegan and cyclist sort of Utopia that certainly didn’t appeal to me and even less to common working class people more worried about getting to the end of the month with food on the table than choosing high end ecological produce and thinking about a wider future for their children.

But now it seems feasible, we need to reindustrialize, governments finally seem to be willing to invest in creating jobs here instead of just bailing out the banks and all the major corporations so they can keep us alive with our dead end jobs, minimum wages and endless debts fuelled by credit after credit, loan after loan, so why not take this chance to create a Green New Deal reindustrialization?

We can create NOW the jobs of the future, not only will we be creating the usual construction jobs, we will also need to train entire crews on operating all these new factories aimed at a sustainable Green New Deal economy, cleaning up the air, getting fresh drinking water from our Oceans and Seas, preparing new bio farms, solar tools, electric machineries, ecological public transportation, we will be creating all sort of manufacturing and research jobs up and down our countries, we need change and we need it faster than our bureaucratic governments are used to deliver, it all seemed impossible to me a couple of months ago, with climate deals that push any minimum changes as “objectives” to reach only decades from now. By then it will probably be too late.

You see, what most climate change activists fail to make most of the working class understand is that by polluting we are creating our own extinction, the planet can survive this and restore it’s Fauna and Flora long after mankind poisoned itself or starved to death. And when the ecowarriors are actually able to get that message to very few working class people, their reaction is mostly: my wage is all gone paying for utilities, housing and food on the first week of the month, my life is horrible, I’m miserable, so what if we all die? I could not care less…

People need better wages more than hope, all this new technological, industrial, and greener jobs should be measured to pay Living Wages. For the first time ever I’m rather optimistic that our governments could, if they have the courage, build a better future for all of us through an actual Green New Deal to boost the economy and create jobs after the COVID-19 lockdowns.

I am hoping for it, but I’m too old to believe in Utopias and on governments caring about the well being of this planet and the population that lives on it, the millionaires will rather invest in doomsday bunkers and isolated fortress mansions in New Zealand to avoid the hungry and dispossessed of the world than to create greener high paying jobs, sadly its up to the governments and if we can’t apply a new Marshall Plan, the least we can do is to create the jobs of the future now by building the infrastructures needed for a Green New Deal to come to fruition.

Posted by Flávio Gonçalves at 13:56