Notes from the "home office" 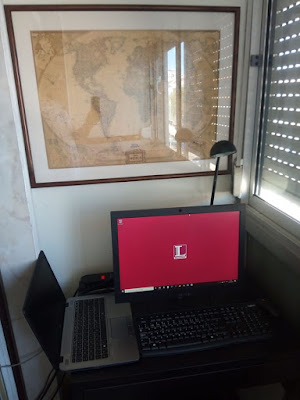 Over the last few days I have been rather active with daily updates on the Libertária journal website, with those updates being cross posted on the Portuguese edition of Pravda.ru. Being part of local government I had to go to our headquarters, our staff is still working daily cleaning the streets, the gardens, collecting garbage and even shopping for the old and ill that have to stay at home.

Breaks my heart that these brave people are paid minimum wage and last year under so called new "anti-corruption" laws we had to stop paying them a Christmas bonus, buying their children toys and gathering both members of the Executive and our staff for a yearly Christmas lunch, this is what we get with blind laws that try to give the impression that something is being done, while actually it has no real affect on corruption (keep in mind we are all members of the Socialist Party).

I decided it was time to boost Libertária's Facebook page, that was stuck on 260 followers for the last two years, so with a generous dose of new posts and investing 20€ on Facebook ads on a single week that number is now at 2,446 followers. Sadly, it also attracted a lot of attention from Brazilian Libertarians, that like American Libertarians think Libertarianism is a deranged Neoliberal Capitalist ideology completely ignoring that for centuries it was a Socialist movement and thus far remains as such in Europe and the rest of the non-English speaking world.

So far I have advanced a few pages on the translations of the Portuguese editions of Evolutionary Socialism by Eduard Bernstein and Herland by Charlotte Perkins Gilman, both will be printed in 2020. Sadly, I still was not able to clear my head enough to finally submit English language pieces that I have long promised for Brave New Europe and the English language edition of Pravda.ru.

Since my wife is part the private sector health auxiliary staff, although I'm "isolated" and will soon be working from home as soon as the multinational where I hold my day job assigns me a computer, we still feel like we're playing a daily Russian roulette game with Covid-19.
Posted by Flávio Gonçalves at 15:53